The volume of the Bluetooth headset on Android devices 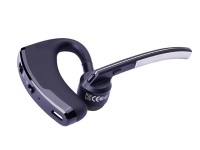 Of course, the audio volume is one of the most important functions of the wireless headset. In this article, we will tell you how to control the volume of the Bluetooth headset on Android devices both programmatically and by hardware.

First, if you are using the wireless headset, it is necessary to make sure that the sound is audible even in a relatively noisy place, such as the bus stop or subway station. However, it may happen that the new headset does not provide such a loud sound as we wish. In such a case, you should not be disappointed too soon. You need to try to increase the volume of the Bluetooth headset on Android. We will talk about it in more detail.

Almost all headset models have keys to control the intensity of sound, which are located directly on the housing of the headphone. To increase the sound during a call, try to press the «+» key a few times to make it louder. When you reach the maximum possible volume, you will hear a short sound in the earpiece. This will mean that the volume cannot be increased anymore.

If, however, the sound is not well heard, then you should try the software method. The fact is that the settings on the earpiece and your smartphone are not united; therefore, they need to be adjusted individually.

After setting the volume on the headphone to maximum, perform the same on your smartphone: when you are talking with somebody, press the rocker on your phone. After the performed operations, you can be sure that the sound is set to maximum.

However, in the most difficult situations, the speaker of the Bluetooth headset can have too low volume. In such a case, you can use the special program for Android. It is called “SpeakerBoost”, and its task is to increase the sound above the max level that can be set in a standard way. The program can be used for the Bluetooth or ordinary headphones, as well as for the speaker.

The SpeakerBoost can be downloaded from the Google Play. Note that this app must be used wisely. Do not set the 100% increase immediately, because you may damage the speaker or break it. The developers warned users about it.

The volume of the Bluetooth headset on Android devices: Видео